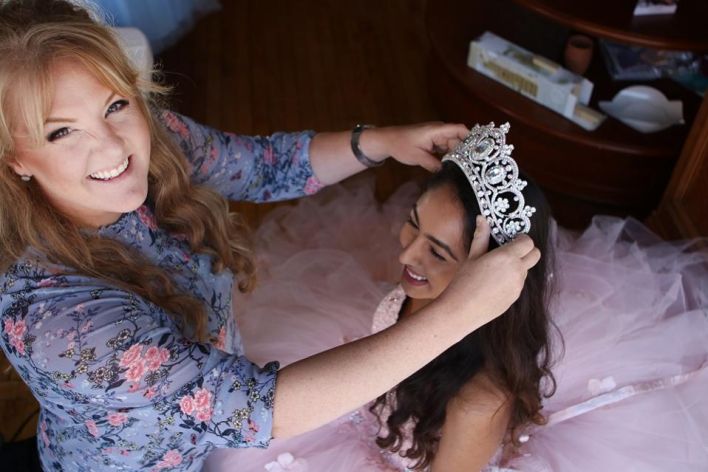 In 2015, Kim Gamez and her husband, Hugo, were asked by their niece to be padrinos for her quinceañera in Mexico. Quinceañera is a celebration of a Hispanic girl’s 15th birthday, marking her transition from childhood to maturity. Padrinos are “godparents,” “sponsors,” or “patrons,” who help pay for the religious items used in the ceremony (the Bible, cross, rings). Padrinos accompany the person (or persons) being celebrated during the church ceremony and throughout the reception. The padrinos may also take on the responsibility of organizing the gifts.

However, because of the high costs of these events, other friends and family contribute, too. The average quinceañera costs $21,781 and has 212 guests, according to the Quinceañera Report. Family and friends help to pay for the venue, bar, party favors, and wedding-like dress at a quinceañera, as well as weddings and baptisms.

Gamez and her husband were delighted and honored by the request to be their niece’s padrinos. Surprisingly, “there wasn’t anything online to help us plan and purchase the traditional goods,” said Gamez. It was a painstaking, manual process that required keeping track of cash, checks, and gifts.

Often entrepreneurs scratch their own itch, according to Paul Kedrosky, General Partner at SK Venture and formerly a Kauffman Foundation senior fellow. They become successful when it’s an itch that many others have, too. An estimated 59 million Hispanic people live in the United States, comprising 18% of the population, according to the United States Census. Only Mexico has a larger Hispanic population than the United States. “In the US, there are over 400,000 quinceañeras every year,” said Gamez. “Globally, quinceañeras are a $49 billion industry and, combined with other traditional celebrations — weddings, baptisms, tres años, and others — create a $400 billion market.” As an entrepreneur, she recognized the big opportunity to provide an online service that organized the party-planning and gift-giving process for Hispanics.

A Founder With A Track Record of Success

Gamez had gotten married, had her first baby, and opened a restaurant by age 20. She invested profits from the business in real estate and opened a second restaurant. Interestingly, she isn’t a chef — her skills are building teams and marketing. Not being a techie and launching a tech business didn’t faze Gamez. She knew she could hire that skill.

No matter the type of event, padrinos, friends, and family could plan, find vendors and products, and fund the celebration. Users can find vendors, such as venues, caterers, music, bakeries, as well as items such as dresses, invitations, and favors. The platform is a cross between event planning, gift registry, and crowdfunding platforms. Selling the restaurant business gave her capital to invest in Mi Padrino.

In 2017, Mi Padrino launched with the goal of 600 users within six months. It blew that goal out of the water; serving 50,000 users. “I felt like I was building a rocket ship and flying it at the same time,” said Gamez.

“We needed money to scale,” she continued. Whether it was because she was pregnant or a lack of understanding of the market potential, when she first started pitching Gamez received a lot of blank stares from investors. When she finally received a term sheet during her last trimester, it brought her pregnancy into the valuation of the company. The investor deemed it a risk for the company.

Based in Ann Arbor, MI, Gamez was far from the traditional venture capital hubs of San Francisco and New York City. While there was some local equity financing available, there wasn’t much. She researched venture capital funds focused on the Hispanic market but soon realized there weren’t many. She also researched female-founder focused pitch competitions.

Mi Padrino was down to the last $6,000 in the bank. Marta Michelle Colon, co-founder of Access Latina, CEO at Buena Gente, and a member of Chloe Capital’s inaugural Women’s Investors Accelerator advisory board referred Gamez to its competition. Her daughter had just been born when Gamez received notice that she made the cut. This was an opportunity Gamez had to take. Her mother and newborn accompanied Gamez to the pitch competition. While nursing in the back of the awards room, she heard her company, Mi Padrino, announced as the winner. She won a $50,000 investment.

The Power Of Referrals

In less than two years, Mi Padrino has topped 500,000 users. Not surprisingly, they are considering pursuing cultural celebrations for other groups such as bar and bat mitzvah.

How can you make life easier for your community?