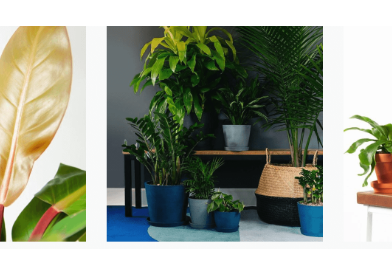 There are dog people, there are cat people, and there are plant people. That last group has been hit with some supercharged fertilizer in the last five years. House plant sales have increased 50% since 2016 in the U.S., per Bloomberg.

Young people who want their apartments to feel like the great indoors have supported a new kind of plant purveyor—brands like Bloomscape, which turned a family-owned greenhouse into a nationwide, vertically integrated business. I caught up with Bloomscape CEO Justin Mast to learn more about cultivating an online community of plant lovers. Read on below.

This interview has been edited for length and clarity.

You come from a family that’s enmeshed in the plant industry. How did growing up in a plant-loving family set you up to start this business?

JM: We’re a year-and-a-half old startup with five generations behind it. It goes back to my great-great grandfather on my dad’s side, and then three generations on my mom’s side. So when I say that I grew up surrounded by people in the greenhouse industry, I really mean it. My parents met in the industry, had a greenhouse, and everyone was in the mix in one way or another.

I was always more of an entrepreneur even as an eight-year-old and a nine-year-old. My parents had me working in the greenhouse. But I convinced them to let me sell plants on the street corner outside of the greenhouse instead. So instead of a lemonade stand, I had a plant stand.

The other thing that was always so magical about the experience was that, come February or March, if you’re in the kind of northern part of the country, that’s when it can get really dreary. And I always got to walk into this massive greenhouse that was just full, as far as your eye could see, of green lush plants, flowering plants.

I then realized everyone’s into buying plants but it should be so much easier. The way we shop for plants, the way we buy plants, the way we experience care, information, and support for plants, hasn’t changed in a long time. I think we could really do something about that to make this whole process a lot simpler and more enjoyable and richer for everyone. So that was the inspiration behind starting Bloomscape.

You mentioned that you’ve only been around for a year and a half. How did you get things up and running?

I’m the sole founder. I worked on putting the business model together and really getting a lot of stuff set up by myself for a while, and then by the time we launched there were three of us. For most of the first year there were six of us. Then leading up to our funding round there were 12 of us, and now we’re 24 and, well, we have a few open positions now. So the growth has been—I think, all things considered, pretty lean. I think the knowledge base and the connections within the industry allowed us to move really fast and make a few smart relationships in a few key moves.

As you probably know, we’re the first and only shop, online shop, to be able to deliver the full size range of plants, potted and delivered and nationwide. So to do that it took partnerships with a number of plant growers that are growing a lot of the product for us. Initially we launched out of my cousin Dave’s greenhouse in Grand Rapids. We had a little space set up off of his greenhouse to launch this out of. And we outgrew that about 12 months faster than we had planned on.

I imagine that some of your customers are people who’ve never owned plants before. Who do you see as your target customer?

You really nailed it. I think the prevailing attitude around indoor plants especially is that “hey, a plant’s died, who cares, people will replace it.” And I think what that really fails to realize is that when people are killing plants constantly, they feel like they’re bad at it and they don’t want to keep buying plants. So we’ve taken a very different approach which is that, you know what, we don’t need to drive repeat purchases because plants are dying. Let’s help people be successful with their plants and help to really reinforce people becoming plant people.

What we’ve seen is that the biggest place to start, to add value, was to make sure that we can get a greenhouse-fresh, large, lush, healthy plant in a pot that’s appropriate for the plant. Let’s just give people a healthy plant and a good start. It sounds so basic but talk to anyone: our plants are healthier, come lusher, and outlast plants that people are buying from pretty much anywhere else. Not a lot of direct-to-consumer startups I think start with this quality ambition, but for us we felt like that was a really important thing.

And then we found that, you know, when someone receives a Bloomscape plant that’s almost the start of our conversation with them. I mean, we get so many questions and comments and thoughts back from our customers that it’s been a really cool conversation to foster.

You’ve got a program called “Plant Mom.” Explain what that is and the role it plays in building customer affinity.

It’s just one of these funny things. We were talking about plant care, and we knew that sending instructions would be a good thing. But people need more than information. They need someone to help them navigate and feel more confident. People aren’t getting into plants to have one more task or tough thing to figure out. It’s supposed to feel warm and comfortable and fun and fresh, not complicated. So how do we do this in a way that expresses our values as a company?

And I was talking about how I was getting into plants on my own as an adult…if there was ever anything wrong with the plant, I’d take a picture and send it to my mom, who’s a plant expert. She could really quickly text back and say, you know what, I bet you’re overwatering that. Give it a chance to dry out and start watering later and it’ll be fine.

We were trying to replicate that element and we thought, “You know what? Why don’t we recruit my actual mom to be our customer service mom, and give a face and a person to talk to.” And that program has been a massive success. We’ve had thousands and thousands of interactions with our customers through Plant Mom. I think we’ve been able to be really helpful to our customers, but it’s also been a great two-way street because we’ve gotten so much insight through that program on what really makes our customers feel successful. What helps them go from where you are like, maybe I’ll try out a plant or two, to all of a sudden you want to have 25 plants in your apartment. It’s really shaped the way we’re creating value for our customers going forward.

You mentioned that your conversation with customers usually starts after they’ve made their first purchase. What channels have been most effective for you in introducing consumers to Bloomscape to begin with?

I don’t want to oversimplify it, but it’s come pretty naturally. Word of mouth, we get a lot of people who have friends who are into plants and got them a plant from Bloomscape and are recommending it as sort of the best option. The combination of the product and who we are and what we’re building seems to really resonate with people. A lot of people when they get plants will talk about their plants, name them, and share them on Instagram. We get a lot of press, I think, in a similar vein. And we do invest in digital marketing. I think a lot of our tactics and campaigns are around when people come to the site, whether it’s search or word of mouth, when they demonstrate an interest in plants we’ve found a way to really give people avenues to sign up or get engaged, and then we keep people engaged.

If I were to walk into the nearest Lowe’s looking for a plant, I’d be completely overwhelmed. Can you summarize what, to you, makes Bloomscape the best alternative to larger retailers that happen to sell plants?

We obsess over two things. I think one is connecting to our customers and creating I think a really amazing experience. Since we are digitally native, I think it gives us a certain ability to do that in some fun ways. We can give people filters to pick the right plants for them. We can instantly support and help when you’re looking for plants.

And the other one, of course, is building out this direct-to-consumer supply chain. Plants don’t fit into the typical warehousing/fulfillment/logistics network that a vast majority of e-commerce and direct to consumer shops can use. So being able to turn on indoor plants of all sizes, ship them throughout the entire country in an average of two to three days, that’s a big accomplishment. Being about to ship a six-foot-tall bird of paradise to Minnesota in the dead of winter is an accomplishment. And I think the more we work, we expand our capacity and go deep on what we can offer there, we find we’re really creating value for our customers. I think we’ll fill a pretty big space that mass retail and other kinds of shopping options just can’t.