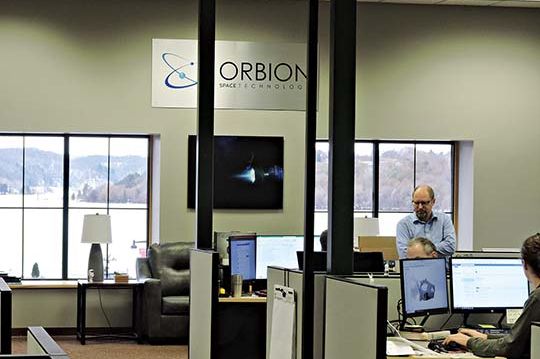 (Graham Jaehnig/Daily Mining Gazette) Orbion Space Technology staff are not only working on revolutionary propulsion technology, they also enjoy one of the finest views of the Portage Lake in the city of Houghton.

HOUGHTON — Just two years ago, Orbion Space Technology was a start-up company. Since its incorporation, Orbion has skyrocketed with an increasing amount of recognition.

Last week, Orbion was named Up and Coming Company of the Year by the Michigan Venture Capital Association. Earlier this year, Orbion also won the Excelerate Michigan Innovation competition, which is an award to the best technology start-up company in the state of Michigan. That award came with a $500,000 prize.

In August of this year, Orbion announced it had raised $9.2 million in Series A funding to mass produce its Aurora plasma thruster systems for small satellites. The funding was led by Material Impact, a venture capital firm focused on investing in innovating technologies and also include Invest Michigan, Invest Detroit, Wakestream Ventures, Ann Arbor SPARK, and Boomerang Catapult.

“That’s a recognition that we’re growing, and growing fast,” said Brad King, Orbion CEO and co-founder, of last the company’s awards,“and we have a lot of visibility.”

Orbion Space Technology is the developer and manufacturer of revolutionary plasma propulsion systems for small satellites. Because of their fuel efficiency, Orbion’s thrusters can save spacecraft operators millions of dollars in operating costs, while increasing the value of the spacecraft’s data product.

The business spun out of King’s research work at Michigan Technological University, where he is a Professor and Director of Research in Mechanical Engineering-Engineering Mechanics.

“We used the Michigan Tech SmartZone to give us early mentoring and get us started, and as I said, a lot of our funding has come from Michigan.”

The Michigan Tech Enterprise Corporation (MTEC) SmartZone is a non-profit organization, incorporated in April of 2002, to focus on commercializing ideas, patents and other opportunities surround corporate, university or private research institute efforts, such as Michigan Tech and Orbion.

“It’s a very close relationship with the university, and the unviserity has been very supportive,” said King. “Not only did the technology come from the university, our company issues contracts back to the university to gain access to unique facilities the university has, and our staff is, probably, 80 percent Michigan Tech graduates, Ph.Ds and Bachelors’, so we’re taking the university’s output and recycling it back into a company, using that to grow.”

King, who has been a faculty member at Michigan Tech for 19 years, said that in his research activities there, he developed the technology with the university.

“Then, Orbion was a spin-off company to commercialize that technology to take it out in formal business,” King said.

Because research and development of the product was conducted at Michigan Tech, King said, the university holds the patents on it, which Orbion licenses from the university